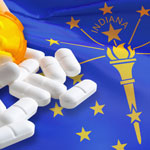 Since 2003, the number of opioid poisoning deaths in Indiana has increased by more than 500 percent, according to the Indiana State Department of Health. Tens of thousands of Hoosiers are addicted to opioids, be they prescription or illegal. The impact of this crisis, identified as such by public health and government officials alike, can be seen across the state. And that impact is being seen and felt throughout our economy and our workforce.

A new study, published in this issue of the Indiana Business Review, tackles the cumulative costs to the Indiana economy of the ongoing opioid crisis.

Consider the following few graphs from the study—and note the strikingly similar trend lines of inexorable increases year after year.

In quantifying and understanding the multi-billion dollar economic impact of this very human crisis, the authors, Brewer and Freeman, have estimated the losses in gross state product, lost wages, in hospital and government expenditures stressed beyond their limits, and the costs of those losses across families, businesses and communities. We are publishing their work in the form of three articles in this issue, with the main article (which includes recommendations for future actions) accompanied by analysis of regional and county impact.

Select findings from the statewide analysis

The opioid crisis continues to accelerate. Community leaders, officials and state government are banding together to confront this crisis. Now, with this study, the authors have explored the cumulative economic costs in addition to the already too-high costs in the lives and well-being of Hoosiers, their families and their communities.