Principal turnover: How can we improve working conditions to keep our principals? 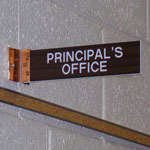 Of the school-based factors that affect student performance, principal leadership is one of the most influential. Given the importance of school leadership to student success, leadership stability is also a critical concern in well-run schools.

During the past two decades, with the influences from federal and state accountability policies and the aging and retirement of the baby-boom generation, principal turnover has been increasing and has raised nationwide concerns on leadership stability and sustainable school improvement.

Principal turnover rates are higher in schools serving high concentrations of low-income, low-performing students and/or students of color (Béteille, Kalogrides, & Loeb, 2012). These underserved schools are often more difficult for principals to manage, due to fewer resources, less parental involvement, a more severe school disciplinary environment and more pressures from federal and state accountability policies on standardized testing. Thus, these schools are often disadvantaged when it comes to attracting and retaining high-quality and experienced principals. For instance, principals in schools with the highest concentrations of students of color are about 60-70 percent more likely to move to another school than those in schools in the lowest quartile of percentage of students of color (Yan, 2016).

Principal turnover can disrupt school improvement efforts, hurt student and teacher performance, and result in a financial toll to school districts. These negative effects of principal turnover are especially detrimental to underserved schools due to their existing struggles in attracting and retaining principals. Compared with the amount of literature on teacher labor markets, the principal labor market has been under-researched. Given the importance of principal leadership quality and sustainability to school management and student success, it is critical for researchers and policymakers to understand what factors influence principal turnover and how to provide positive working conditions in order to retain principals and sustain long-term school improvement.

A principal’s career transition status can be divided into six major categories:

Based on the Schools and Staffing Survey (SASS) in 2011-12 and the Principal Follow-up Survey (PFS) in 2012-13 from the National Center for Education Statistics (NCES), nationally, 77 percent of principals in 2011-12 stayed at their current positions the following year. Figure 1 illustrates that among all the turnover categories, movers accounted for the highest percentage (6.6 percent), followed by retired (4.3 percent), promoted (2.9 percent), demoted (2.7 percent) and leavers (1.0 percent).

Table 1 provides a descriptive analysis of principals’ working conditions. For job benefits, the average annual salary for principals was $90,453 nationally, with a standard deviation of $21,910. Although principals’ salaries are competitive compared with those of teachers, many principals perceive the gap between their salaries is too small to reflect the much greater responsibility that principals assume compared with teachers. Empirical studies indicate that higher salary lowers principal turnover rates (Akiba & Reichardt, 2004; Baker, Punswick, & Belt, 2010; Pijanowski & Brady, 2009). In addition to salary, about half of principals had meet-and-confer or collective bargaining agreements,2 and less than one-third were in school districts with a tenure system.

Long working hours and time away from family are often regarded as personal and family disincentives for principal retention. On average, principals spent 59 hours per week on all school-related activities before, during and after school. This is consistent with a national report conducted by the Institute for Educational Leadership (IEL) that, on average, a principal works over 10 hours a day (Usdan, McCloud, & Podmostko, 2000). Considering a typical workweek to be 40 hours, only about 4 percent of school principals work 40 hours or less. More than 90 percent of principals work 50 hours or more per week, with about 60 percent of principals working 60 hours or more per week on all school-related activities.

In terms of the school disciplinary environment, bullying, physical conflicts and acts of disrespect for teachers were the three most frequent student disciplinary problems. The disciplinary problems are prevalent in schools with high concentrations of low-income students and students of color. These schools often lack coherent instructional programs and regular routines, and suffer from more complex issues related to socioeconomic status, organizational structure and cultural perspectives (Banks & Banks, 2010; Mukuria, 2002). Thus, principals in these schools are confronted with more pressures and responsibilities.

Principals have varied influences on different domains of decision-making in school. Among the seven domains of school decision-making (as shown in Table 1), principals perceived themselves having the highest influence on evaluating teachers (3.9), hiring teachers (3.8), setting discipline policies (3.8) and the lowest influence on establishing curriculum (3.1) on a 4.0 Likert scale.

Using multinomial logistic regressions with regional fixed effects (while controlling for principal characteristics and school context), Yan (2019) finds that salary has a significant influence on principal turnover; however, non-pecuniary working conditions lower the relative importance of salary to principals’ career transitions. In addition, principals who had a tenure system were 68 percent less likely to leave the education system, and those with meet-and-confer or collective bargaining contracts were 56 percent less likely to change to non-principal positions than those without these job benefits.

For a full discussion of the methodology and regression results, see the Educational Administration Quarterly paper at https://doi.org/10.1177/0013161X19840391.

First, given the increasing pressures and workload that principals are confronted with, district policymakers could provide principals with competitive job benefit packages, including competitive salary, beneficial job contracts and a principal tenure system to improve the attractiveness of the principalship in school and to promote principal retention.

Third, since principals are not the only decision-maker in the school system, influences from multiple stakeholders—such as state and local school boards, school districts, teachers, and parents—can be either prohibiting or supportive to principals’ influences in school (Harris, 2009; Ni, Yan, & Pounder, 2018; Spillane, 2006). Therefore, it is important for various stakeholders to provide principals with an adequate amount of influence on various domains to facilitate their leadership practices. For instance, policymakers could provide principals with more influence on determining teacher professional development and budget spending, but provide more guidance and control over setting student performance standards. Moreover, policymakers could communicate with principals on the desired amount of autonomy for their leadership practices in order to help them with long-term school improvement goals and student success.