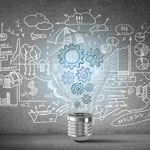 Recent large-scale economic development (ED) initiatives like Amazon’s search for “HQ2” have underscored the need for ED practitioners and policymakers to be able to measure their community’s development capacity. The immensity of available data that could be used to do so, however, can be quite overwhelming.

The Indiana Business Research Center’s (IBRC) work with Metrics for Development (M4D) involves collecting relevant data that can be used to gauge a county’s capacity for economic development and packaging it so policymakers, ED practitioners and the public can derive meaningful insights for their communities. M4D, along with its umbrella project Regional Economic Development (RED), will build upon the functionality of StatsAmerica.org, which already provides vast amounts of data.

The underlying data contain a variety of different scales and sizes, so using the raw numbers could produce misleading results because it would mean measures on a larger scale would, in effect, be weighted more heavily than those on a smaller scale.

A simple min-max method of feature scaling was used to represent all data items on a scale from 0 to 1, where 0 = worst and 1 = best in the United States for any given measure. For those measures that would, in theory, negatively impact development (e.g., poverty rate), the inverse was used. This process ensures the “0 = worst, 1 = best” dichotomy is upheld and makes comparison between the 3,110 U.S. counties straightforward and intuitive.

Given the vastness of the data set (over 70 variables for each U.S. county), 13 indexes were created by adding the relevant measures together and then applying min-max rescaling again. Indexes were built around topics that represent a conventional accounting of development capacity, including human capital, health, industries, population and occupations. More novel indexes that considered less-obvious aspects of capacity, such as commuting and urban sprawl (e.g., means of transportation to work), civil society (e.g., charitable organizations), natural amenities and school financing, were also constructed to paint a comprehensive picture of each county’s development capacity.

Table 1: Variables in the M4D indexes

View county-level nationwide maps of these indexes in the appendix.

A good way to start exploring these data is to look at the differences between the highest-and lowest-scoring counties in the United States. Figure 1 shows the makeup of the raw (i.e., non-standardized) M4D indexes for the five highest- and lowest-scoring counties. You can see that the five counties at the low end of the spectrum are penalized for their scarcity of job opportunities, low earnings and productivity, poor health, and lack of school systems. Ziebach County, South Dakota, also suffers from remarkably high crime: Its Crime Index is 0, meaning it has the highest crime per capita in the country. For 2014 (the latest year of data available), the FBI reported 284 property crimes per 1,000 people and an astounding 215 violent crimes per 1,000 people. For context, the next closest county is Lincoln County, West Virginia, with 218 property crimes and 39 violent crimes per 1,000 people.

Note: Lake and Peninsula, Issaquena and Buffalo counties are served by school districts based in neighboring counties, so the school funding measure = 0.
Source: Author’s calculations

What exactly is so different between the counties at the low end and the high end? To investigate this question, the counties with M4D scores above and below two standard deviations from the mean—a total of 158 counties—were isolated and statistics were compared for nearly 200 variables, some of which were included in the indexes and some of which were not. Table 2 shows a small selection of these.

Table 2: Comparison of selected variables between highest- and lowest-scoring counties by M4D Index

The lowest-scoring counties exhibit several characteristics that are contributing to the divergence, including:

But what can be said definitively is that there are material differences between the counties at the low and high ends of the spectrum that may be contributing to disparate economic outcomes and development capacity. Of the broad characteristics mentioned above, county officials are likely best equipped to improve the low labor force participation problems through increased investment in workforce training programs and, even more importantly, re-training programs for workers displaced by automation.

A new report by the Brookings Institution notes that small towns and small metros, as well as rural areas—many of which fall on the low end of the spectrum in this analysis—are far more likely to suffer from job losses due to automation in the coming years, which makes education, re-training and skill development all the more vital for these counties.4

Combating brain drain, though no easy endeavor, would do a great deal to improve other characteristics that could be contributing to meager development capacity in the lowest-scoring counties. Enticing more educated people to a community—and improving the skills and education of residents already living there—could raise health outcomes, attract new businesses (and jobs), reduce crime and expand the economy overall.

It is worthwhile to consider the 13 indexes separately and assess their relative impacts on desired outcomes. Using a linear regression of each of the indexes on the ratio of establishment births (openings) to total establishments (a common measure of entrepreneurship), we can see which index has the greatest relative impact on new business development.

The indexes with the greatest relative positive impact on this measure—meaning they were statistically significant and had the largest positive coefficients in the regression equation are:

That these indexes are statistically significant provides additional support for the hypothesis that investments in human capital, such as education and job training, will likely improve other outcomes not directly related to human capital development. Furthermore, positive correlation coefficients between the Literacy and Population (0.2), Literacy and Jobs (0.27) and Literacy and Health (0.63) indexes indicate that a rising tide may indeed lift all boats.

Surprisingly, the School Funding, Industry Mix, Creative Class Occupations and Industries, and Food Access indexes have statistically significant negative coefficients, meaning they have a negative impact on the ratio of establishment births to deaths. It should be noted, however, the indexes only explained 15 percent of the variation in the dependent variable, implying that unobserved factors are also affecting business start-ups.

Indiana is well situated for economic development, but automation is a looming threat

Figure 2 shows the geographic distribution of standardized M4D scores in the state of Indiana. (The standardization is based on all U.S. counties, not just those in Indiana, which is why the scores max out around 0.75 and not 1.) Higher scores seem to be concentrated near metro areas, like around Indianapolis, Fort Wayne, Evansville and Bloomington, though this isn’t true in all cases. Hamilton County has the highest M4D score, 0.74 (raw score of 7.62 out of 13), and Switzerland County has the lowest, 0.49 (6.42).

You could say that Indiana is fortunate: The score of our lowest county is relatively close to the middle of the pack for the entire country. This implies strong development potential across the state overall, especially in cities like Carmel, Bloomington, New Albany, Greenwood and Elkhart, and even smaller communities like Madison, Warsaw, Spencer and Jasper. Some regions are lagging behind, however, especially those along the Illinois and Ohio borders and near Chicago.

Figure 3 is the same idea as Figure 1 but just for Indiana counties. Right off the bat, you may notice that the separation between the high and low ends of the spectrum is much lower in Indiana than in the United States as a whole. This indicates Indiana is well suited for economic development overall.

The main factors contributing to low scores for the bottom five counties seems to be a low mix of industries (especially for Martin County), low concentrations of creative class occupations and creative industries, and relatively low natural amenities. The higher-performing counties have a greater concentration of CC occupations and industries, better health and are more highly educated, especially in Hamilton and Monroe counties.

But there’s a wrinkle in this relatively good news: The risk of automation threatens Indiana more than any other state, according to the Brookings Institution report mentioned above. Due in part to the state’s manufacturing roots, the authors of the report conclude that about 49 percent of the average Indiana worker’s tasks are potentially automatable, which is higher than any other state.

When they break it down by metro area, several Indiana metros top the list, including Kokomo, Elkhart-Goshen, Michigan City-La Porte, Terre Haute and Columbus. See Table 3 for a list of Indiana metros at highest risk of automation. Practitioners and public officials in these metro areas—though they certainly can’t do it alone—must be proactive and take action to limit the distress of worker displacement due to automation.

This analysis has several limitations. The selection of variables was subjective, as different researchers are likely to have different priorities. Perhaps they may choose to employ a more sophisticated and objective method for selecting variables, such as factor analysis. The motivation for setting up the analysis this way was mainly simplicity—but simplicity has its drawbacks.

Arguments could be made that, for example, charitable giving and how people commute to work aren’t important for measuring development potential. Such arguments may be valid, and perhaps an analytical strategy that weighted some indexes more heavily than others would’ve been appropriate. This analysis didn’t cover everything either, which is why we prioritize making the data available on StatsAmerica so users can conduct their own analyses.

Regardless of any limitations, the findings are relevant to economic development practitioners and local officials. I show that brain drain—low levels of education and literacy, population loss, low funding for public education, low labor force participation, etc.—could be contributing to poor economic and social outcomes and, in turn, limits development capacity in the low-scoring counties. The implication of this is that investments in human capital—funding apprenticeships, making higher education more accessible, implementing displaced worker re-training programs, etc.—may alleviate other ills that disadvantage struggling communities.

Additionally, the looming threat of automation should be a concern for county leaders and policymakers, especially in Indiana. Investments in worker re-training programs aimed at those displaced by automation must be part of a comprehensive strategy on the local, state and national levels that views automation not as a threat but as an opportunity to enhance productivity and improve workers’ lives.

How can ED practitioners and policymakers apply the findings of this analysis to assess their development capacity and improve economic outcomes for their communities? The most obvious application is benchmarking against other counties that are in close proximity or exhibit similar characteristics. This functionality is planned for the rollout of REDWeb on StatsAmerica.org—not just with M4D but with a wide range of data.

This functionality would allow practitioners to assess their communities’ strengths and weaknesses across the 13 indexes and consider ways to improve their capacity for development. Moreover, as a part of RED, we intend to produce computational models for users to interact with and test the efficacy of potential development strategies. The combination of models and M4D will be a valuable resource for officials to plan for and manage development in their communities.

This article was prepared by the Trustees of Indiana University using Federal funds under award number ED17HDQ3120040 from the U.S. Economic Development Administration, U.S. Department of Commerce. The statements, findings, conclusions, and recommendations are those of the author(s) and do not necessarily reflect the views of the Economic Development Administration or the U.S. Department of Commerce.