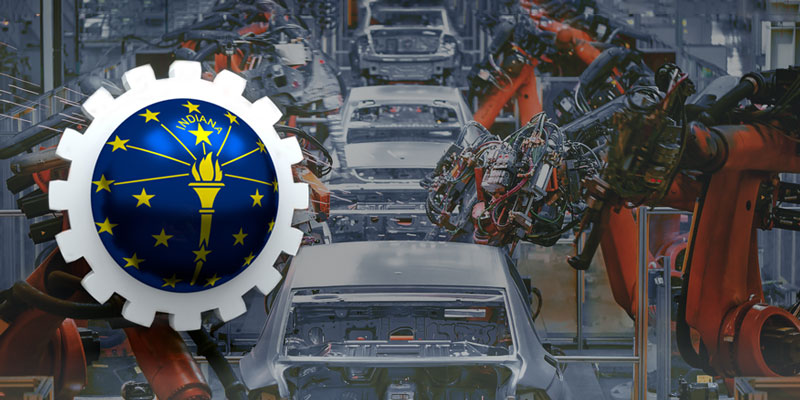 Amid mixed leading signals and a turbulent news cycle, we expect Indiana’s economic output to grow at a rate of about 1.25 percent in 2020.

Sustained growth is expected, largely due to continued strong consumer spending countervailed by weakness in manufacturing. Business investments have not met expectations from the 2018 tax cuts, and corporations have been conducting stock buybacks rather than capital purchases. As the trade war with China continues and the global expansion is slowing down, the Institute for Supply Management (ISM) reports that manufacturers have confirmed a point of contraction—with three consecutive reports each below 50. This is unseen since the beginning of the Great Recession. The September 2019 report1 came in at 47.8 while October remained below 50 with a reading of 48.3.2

Automobile and light truck sales in the U.S. are expected to drop from 16.8 million units in 2019 to 16.4 million units in 2020, a decline of about 2 percent.3 Indiana will experience a more significant decline than the U.S. as a whole, since Indiana is a heavy manufacturing state with its supply chain entrenched solidly within the automotive sector.

Consumer spending strengthened in recent years due to wage increases across the country, particularly in Indiana, which could result in inflationary pressure. However, the latest information suggests continued wage growth may stall.4 The Federal Reserve has been dovish of late, with cuts to the federal funds rate of 75 basis points thus far in 2019. These cuts should help keep lease rates and other financing options in check, reinforcing demand for automobile and light truck purchases.

Indiana is expected to experience slower job growth and gross output due to a tight labor market. In September 2019, the unemployment rate in Indiana was at 3.2, lower than the U.S. rate of 3.5 percent.5 Furthermore, Indiana’s labor force participation rate (64.5 percent) is higher than the U.S. (63.2 percent). With fewer and fewer people available to hire, the tightness of the Indiana labor markets will serve as a drag on output and employment growth.

Figure 1 shows the relationship between real annual Indiana gross state product (GSP) and U.S. gross domestic product (GDP) growth from 2008 to 2018, with projections for 2019 and 2020. Based on a conservative forecast, the inflation-adjusted U.S. GDP growth in 2019 would finish at 2.3 percent, a 0.6 percent decline from 2018.6 We calculate the most recent annualized quarter-over-quarter real growth rate for the U.S. to be 3.2 percent and 1.3 percent for Indiana. The most current data available (through the first quarter of 2019) indicate U.S. output growth has been higher than Indiana’s growth rate for four consecutive quarters.7

Two factors could be causing slow growth in Indiana: a reliance on manufacturing, which is said to be in contraction, and tight labor markets. Each of these reasons is explored below.

Over the past year, various media have reported conflicting information about the extent of impacts from tariffs on imports and exports in America. Thus, any attempt to accurately quantify the impact of the current trade war on the Indiana economy at this point, would be impossible. With an ongoing trade war across countries and the possible ratification of the new trade deal, the United States-Mexico-Canada Agreement (or NAFTA 2.0), Indiana’s manufacturing and farming industries will be affected.

While nearly one in every five Indiana jobs is in manufacturing, the overweighting in the manufacturing sector is even more pronounced in terms of GSP. Indiana continues to easily lead the nation in manufacturing output (around 28 percent of GSP), with second-place Louisiana coming in around 22 percent (see Table 2).

The dependence of the Indiana economy on manufacturing presents three potential consequences.

In 1950, Indiana was home to 166,627 farms, with more than 157,000 operators. Today, Indiana is home to fewer than one-third of that many farms and farming operations.10 In 1977, gross output from farming in Indiana comprised 3.4 percent of the state economy. As of 2017, the amount had dropped to 2.3 percent of the economy, with output of $4.4 billion. It is apparent that farming as a fraction of the economy in Indiana has shrunk over the decades. Yet, Hoosier farmers (totaling over 94,000 in 2017) as individuals are certainly affected by the trade war.11 According to the Indiana State Department of Agriculture (2019), Indiana was the eighth-largest agricultural exporter in the country as of 2017, the 10th-largest farming state, and in the top five among U.S. states that produce ducks, popcorn, ice cream, tomatoes, pumpkins, turkeys, corn, soybeans, watermelons and hogs. Even so, farming accounts for a relatively small number of jobs available to Hoosiers and has been declining for many decades. Thus, farming is not an accurate representative to gauge our economic condition in the near future. However, for the 94,000 farmers among us, the trade war is quite real.

At the end of the day, the main driver of the Indiana economy is manufacturing. During expansions we thrive, and during contractions we hurt.

In spite of the tight labor markets in Indiana, the results for 2019 are expected to support slight positive gains with respect to jobs—filled and created. Moving into 2020, job growth in Indiana is expected to continue to lag behind the U.S. as a whole (see Figure 2), as the expansion seeks productivity gains through capital investments as labor shortages increase.

Indiana has a history of lags in educational attainment. The jobs tailored to certain demographics are thus prone to recessionary contractions. Wages are on the low end, and the overall economic structure is less capable of expanding at times of peak employment (like now).13 Thus, in future periods, particularly periods of economic contraction, Hoosiers stand cyclically vulnerable compared to other states. This is of particular concern now, as the economic expansion continues forward in time longer than ever before.

Indiana also lags behind peer states in business investment, measured by venture capital investment. Both characteristics—higher educational attainment and venture capital investment—illustrate opportunities for Hoosier leaders. With positive change, Indiana could drive its labor force in a direction better suited to acclimate to the inevitability of cyclical unemployment turbulence. Artificial intelligence, robotics and a host of other important areas will increasingly become the topics of economic opportunity and the main drivers in business investment, while freeing production demands from labor pools that are unavailable.

Note: The LFPRs are calculated for the population ages 16 and older.
Source: U.S. Bureau of Labor Statistics

While the LFPR lags behind rates seen 15 years ago, the questions about wage increases still remain valid. The new LFPR may represent a new level of full employment because of the aging population and a lack of fitness or desire with respect to work-readiness. Furthermore, if wages are rising in Indiana, what level of jobs have been seeing the increases? To answer this question, we analyzed wages over time (2004-2018) within quartiles of the labor pool in Indiana. Figures 5, 6, and 7 address this point.14

Figure 5 reflects that wages in Indiana within the first quartile of wage earners started lower and have increased slightly more slowly than the U.S. as a whole. Between 2009 and 2014, wages at this level were relatively flat but have accelerated upward since 2015.

From Figure 6, we can see that wages in the second quartile of earners increased slowly during the recovery period and have been accelerating since 2015. Again, the U.S. as a whole started higher and has marched forward with a slightly faster growth rate overall in this second quartile.

Figure 7 shows additional evidence that over the past 15 years, wages across the U.S. have risen faster than wages in Indiana.

From the figures, we notice the consistency of recent acceleration in wages since 2015, and that the U.S. average quartile wage levels have been consistently above those of Indiana. Yet perhaps a bigger question is, why have wages in the U.S. outpaced wages in Indiana?

A possible answer is innovation, which derives from the educational attainment level of the relevant labor force. Thus, while Indiana has a relatively tight labor market—which drives up wages during an expansion, Indiana also has a relatively poorly educated workforce, which would drive wages down compared to the U.S.15 Innovation is considered below.

In this section, a relative comparison of capital investment in Indiana was made to neighboring states to see how we stack up (see Figure 8).

Figure 8: Amount of venture capital dollars per capita in U.S. and neighboring states

Typically, venture capital is invested in forward-looking technologies that have the capacity to drive strong growth and to yield excess earnings, which in turn drive wages higher. These deals are exciting as they bring the promise of cutting-edge work requiring specialized knowledge and human capital. All of these attributes would move Indiana forward, as the state lags behind our neighbors in venture capital dollars invested.

There might be a silver lining here, however. Indiana is only significantly outpaced in terms of venture capital dollars by Illinois here in the Midwest. Figure 9 shows that firms in Indiana have landed nearly as many VC deals as Michigan, and the trajectory is clearly upward in direction from 2013 to 2018. Investments in innovation and human capital are certainly part of the answer to where we should go from here, and moving in the right direction is a key first step.

Should the national economy slow more than expected in 2020, Indiana could experience negative growth. Risks to growth in Indiana include the following: